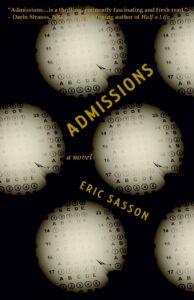 The timing couldn’t be riper for a book about the warped world of college admissions and the lengths people will go to forge, steal, or manufacture opportunities for their children – or for themselves. Eric Sasson’s quirky and engaging debut novel, Admissions, is just such a book. High school junior Arianna Levy nails the central themes of Admissions when she writes in her journal, “We’re all acrobats on unicycles stranded on high wires with plates spinning from our mouths, desperately trying to maintain our balance, always one step away from everything falling apart.” Arianna’s appraisal could speak to a thousand issues, many that might seem to claim such elevated stakes more justly, but she is earnestly detailing the college admissions process and its attendant woes. Ask any recent high school student, parent, or teacher (or several Hollywood big names) and you’ll learn that the stresses of college admissions have escalated to unprecedented heights in the past handful of years, justifying Arianna’s vantage and establishing the stakes of this novel. And don’t be fooled into thinking this book is only about teenagers and their woes. The real focus is on our cultural obsession with achievement and the profound toll of our daily work to keep up appearances.

Tensions mount in Admissions as the messy trajectories of a batch of juniors on the brink of ultimate success or failure at a competitive New York City high school tangle with each other. Swept up in the action are a few adults who encourage and, at times, abet them, in achievements and ploys that range from exemplary to cutthroat all the way to illegal. Chapters alternate among the characters’ voices, and their disparate points-of-view parallel each other and build toward complementary climaxes.

Gabrielle Levy storms onto center stage with her novel-opening lines: “They could scoff at her, bemoan her aggression, deride her shrillness, question her taste – well, maybe not that – they could call her a slew of names but no one, ever, could deny the steadfast devotion that Gabrielle Levy showed to her daughter.” Gabrielle is wound so tightly it would take only one small thing to unspring her, and that small thing comes in the shape of Mandela Robinson, Arianna’s toughest competitor at school. Meanwhile, Arianna is as prissy as Gabrielle’s helicoptering would predict: cutthroat, meticulously studious, and nearly ascetic in her daily strivings to hold her positions of excellence in everything, academic and extracurricular alike.

Randall Miller, an SAT prep tutor in demand in this high-end Manhattan high school world, despite his lack of any real high-end cred (his parents still give him regular financial support), hopes soon to recruit enough higher-paying private students to leave his test prep company employer and better realize his dreams of the writing life. Randall offsets his mediocre prospects through daydreaming that “[i]n a few months – or a year, at most two – he’d complete his screenplay, or novel, or Broadway musical. By then he’d have a supportive boyfriend…,” too.

Legion Cartwright, popular, weed-loving child of a self-focused, uber-wealthy father, lost the $50,000 his dad gave him to invest as his college payment plan. Now his college prospects depend on his ability to ace his SATs and score merit aid. Without money, but with the right amounts of seduction and manipulation, Legion figures he can buy all the tutoring, and success, he craves.

Mandela Robinson, aspiring artist and the only black kid in a sea of white hyper-privileged over-achievers, only joked about wanting to go to Arianna Levy’s first-choice school, but her mother, seeing Mandela as a threat, wants to pay him not to apply there. He wants to see just how far she’ll go. Unexpectedly, the two connect through art, and the aftermath of this connection rocks both their worlds.

Each voice starts off superficial, even unlikable, but as we get to know them, and glimpse along with them the potential of their better selves, we feel for them, even when they behave appallingly or refuse to move toward those better selves. Randall, for one, makes every wrong choice, but his mistakes and their ensuing quagmire inspire the writing project he’s been hoping for. In the book’s meta twist, this project is the novel Admissions itself.

By turns clever, sassy, sexy, and indulgent, the book reads like a Vanity Fair gossip column of the college-bound jet set – and their helicopter parents and neurotic tutor. Don’t forget Arianna’s “acrobats on unicycles stranded on high wires” metaphor, though. As true for Arianna as for each character, “We want to let go, but we’re afraid of being thought of as failures. So we keep up the dance even when it makes us miserable.” The novel’s wry wit blends with more complicated and soulful notes as this bunch of deeply flawed humans struggles to balance all the way to the end.