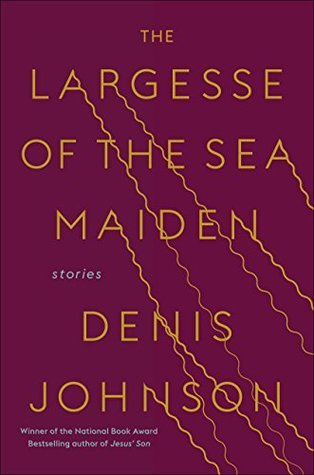 Life gives and takes in Denis Johnson’s collection of short stories, The Largesse of the Sea Maiden, a posthumous publication in which Johnson reveals a path that does not end with death but travels through it.  In this book, characters live on in various forms through a perpetual cycle of transfiguration. Whether wealthy or impoverished, they want to pick the “[a]pples that summon sea maidens” or find “eggs that fulfill any wish.”  They get out of bed and “go out into [the] quiet little neighborhood looking for a magic thread, a magic sword, a magic horse.” Perhaps if they find that thread, they can sew the scraps of their lives together into a coherent whole and escape the real world where people die real deaths.  No, they cannot escape death, but Johnson’s characters are inevitably transformed.

From an ancient folk tale, the sea-maiden grants great fortune in return for a fisherman’s sacrifice—his son.  Humans in the folktale undergo life changes and, in the end, the son lives on. Fortunately for readers, the same is true for Johnson: he lives on through his writing.  Alongside his earlier collection of short stories, Jesus’ Son, and many novels, plays, and poetry collections, this book starkly highlights the maturation of Johnson’s vision.  Compared to Jesus’ Son, The Largesse of the Sea Maiden is more smooth jazz than hard rock but Johnson’s straightforward style allows us to appreciate both equally.  His late-life, low-key approach brings us to “the phase in which these visits to the emergency rooms and clinics [increase] in frequency,” not due to the characters’ own negligence and self-indulgence as displayed in the gritty Jesus’ Son, but as a natural consequence of life and aging. Contrasting the earthy Jesus’ Son, this book flows in metaphysical waves that offer a different perspective.

Whether there is a path to another world is a question Johnson’s characters ask throughout.  In “Doppelgänger, Poltergeist,” Mark Ahearn searches for life among dead brothers, two of his own and Elvis Presley’s stillborn twin.  Ahearn robs a grave and abandons a career as a poet to pursue his obsession. He wavers, believing “the concept [of reincarnation] to be solely metaphorical” yet later insists that his friend Harrington is “‘the reincarnation of… [his] brother’s stillborn twin.’”  The skeptical Harrington points out that “in order to accept this proof…we first have to accept life after death.” In “Triumph Over the Grave,” Darcy Miller reveals that his deceased in-laws are ‘“not ghosts… They’re alive.’” He is in touch with the other world as he slowly slips away, as is Link who is required to “live each incarnation to the last natural breath.”  Even “Strangler Bob” “had evaporated. Now here he is, reconstituted full-length in his bed.” The characters do not question an afterlife; it simply comes in many forms. Everyone experiences some type of transformation, transcendence, escaping one world for another.

In the subtitled “Whit” from the connected story “The Largesse of the Sea Maiden,” Whit appears as a prototypical prisoner of life who had “crawled out of [his] twenties leaving behind a couple of short, unhappy marriages.”  He is confronted by the voice of his dying ex-wife, lamenting that he “suddenly didn’t remember which set of crimes [he] was regretting” and observes that “[we] repent the things [we have] done, and regret the chances [we] let get away.”   Whit pays homage to this adage in another story subtitled “Accomplices.” He finds himself complicit in the destruction of an expensive painting thrown in the fireplace, watching it mutate, at “first black and twisted, soon gray and fluttering, and then the fire had it all.”  Are we all that painting, transformed at the whim of others? Does Whit regret that he did not stop the destruction or is he confessing his hand in it? While Johnson leaves the answers to his readers, he effectively presents the questions: Do we control our world? Does it make any difference?

Throughout this book, characters continually transform while Johnson’s prose transcends the mundane universality of dying words.  He invites death to our door, but dying does not necessarily mean the end. Change is what makes this book. Yes, we are continually surrounded—at the very least, touched—by death.  The protagonist in “Triumph” recounts the deaths of no fewer than six people at different times and years later he observes that “[i]t doesn’t matter. The world keeps turning.” Indeed, each day of living does not necessarily bring us one step closer to death—we are always just one step away.  Like in Jesus’ Son, his characters inevitably face death, and Johnson does revisit some “friends” for old time’s sake.  Mark Cassandra, recovering in “The Starlight on Idaho,” sounds a lot like the narrator in Jesus’ Son, once again close to recovery, and Dundun reappears in “Strangler Bob.”  But unlike his earlier collection, with a few exceptions, here almost all Johnson’s characters are on a path to new understanding.

Of course, death is universal and Johnson provides no special insight into its inevitability.

But we feel it personally when his narrator writes that he is “not dead. But maybe by the time you read it.”  Throughout his book, he enables readers to feel personally a transformation. One can appreciate Johnson’s ability to create vivid images of the struggle of individuals from all walks of life to accept, yet transcend, their circumstances.  In the folk tale, the son who is sacrificed for bounty takes destiny into his own hands, saves himself, and flourishes. Johnson’s journey from his early work shows a mellowing perspective that enables us to see that we can transform, too, and appreciate the paths that lead us to another place.

David Hartshorne is a writer in the Chicago area and an MFA candidate in Creative Writing at Converse College in Spartanburg, SC. He earned his BA from the University of Illinois Springfield and teaches English to students from all over the world. He is also an accomplished ceramic artist who teaches pottery to adults in northern Illinois.