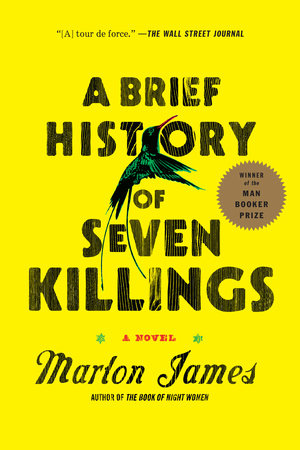 Beginning in the 1960s, gang-violence erupted and created chaos in Jamaica. In his award-winning novel, A Brief History of Seven Killings, Marlon James introduces us to Jamaica’s international organized crime, immersing his reader into the history of Jamaica’s gang-culture over the span of three decades, stretching from Kingston to Brooklyn.

In the first chapter, James introduces us to Sir Arthur George Jennings, a former politician who is deceased. His narrative sets the tone for the rest as he tells readers that when people are dead, they’re not really gone. He gives us a dictum contrasting those who are alive and those who are dead: “Living people wait and see because they fool themselves that they have time. Dead people see and wait.” His statement is a reflection of the chronicles in the novel. James produces an extensive list of seventy-five characters. Each character has a significant role adding power behind James’ words, which illustrate his attentiveness to minute details.

In these chronicles, James provides a real and gritty portrayal of Jamaica and the people who were affected by the politics and gang-culture. Readers experience the horrific surroundings in various parts of Jamaica and the drug trade that spread to Miami and New York. The stories are of those who see and wait. In essence, they see what is happening to their people and country, and they are awaiting an opportunity to strike and gain power. As the Singer says, “Some people have this thing ‘bout themselves, maybe is a ghetto thing where even if another man don’t destroy you, you going destroy yourself…” The narratives give gruesome recounts of rape and murder, including genital mutilation.

Through these cruel encounters, we become aware of the social construct within Jamaican society such as racism/colorism. For instance, white people and people with fairer skin are treated with more respect and are perceived as less ghetto. The issue of female inferiority is also addressed as men easily hit women (like when Bam-Bam’s mother was beaten by his father, and then shot in cold blood by gang members) and as they dismiss women (as seen by the consistent dismissal of Nina Burgess by the Singer and his people).

Marlon James exposes his readers to unfiltered Jamaica. His realistic and grim depiction of Jamaican politics and gang-life offers an engrossing tale of gruesome truths.

Shannon Murphy has recently completed her MA in Multicultural/Transnational Literature at East Carolina University and is a passionate lover of literature and blogger at worldbysmurph.weebly.com. She is in the process of finishing her first fiction piece and hopes to continue a career in writing while traveling the world.