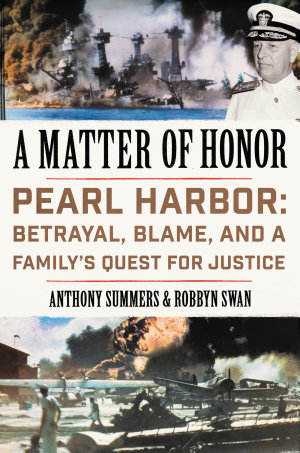 Though I was born twenty-one years after the attack by Japanese forces on the U.S. Naval Base Pearl Harbor in Hawaii, I have always been aware that it was the reason that the U.S became engaged in World War II. I have heard President Franklin D. Roosevelt’s address and seen the footage. This, though, this is my first adventure reading an entire book about the attack, and I picked a good one.

A Matter of Honor: Pearl Harbor: Betrayal, Blame, and A Family’s Quest for Justice, by Anthony Summers and Robbyn Swan, details the days leading up to the attack on Pearl Harbor. The authors show readers how, despite their best efforts to keep those at the base safe, Admiral Husband Kimmel and General Walter C. Short were fighting a losing battle. Their requests for equipment and intelligence were all but ignored due to ignorance and the mislaid hope of those in Washington that the Japanese would not attack Pearl Harbor.

The authors accumulated vast amounts of information from individual documents in separate folders, resulting in a book a quarter of which is notes.

Detailed descriptions of Kimmel’s and Short’s actions prior to the attack provide the backdrop to December 7th and what followed.   A Matter of Honor is a book mainly about how the actions of two men may or may not have led to more destruction during that initial attack on Pearl Harbor, the probability that both were used as scapegoats, and the effects on Kimmel and his family.  The narrative has been recreated so well the book reads like a well-written thriller

A Matter of Honor definitely is a story about war, and governmental failure. However, at the heart of it is the account of a good man trying to do his best at his job, and then how he and later his family did all they could to restore his honor and his and General Short’s highest wartime ranks.

After a brief investigation into the attack, the Roberts Commission was created and the military stripped Admiral Kimmel and General Short of their rank.  The Commission was convened to look into the failures of the Army and/or Navy which led to the attack, but it ignored military and legal protocol. During the proceedings, no oaths were taken, no one was sworn in, and no notes were transcribed. Kimmel was not afforded the rights to counsel, or to cross examine witnesses, or to correct his transcribed statement which was just a garble of misinformation

Though after the war the military  admitted he was not in dereliction of duty on the day of the attack, they never did restore either man’s ranks.  After Kimmel’s death, his two surviving sons found new energy to plead his case for reinstatement of his rank.

Once Kimmel finds a team of lawyers, the last six or so chapters of the book reads like a really good legal thriller.  The book alludes to the possibility many people in high places knew  that both Kimmel and Short were thrown under the bus by Roosevelt.

The Admiral’s sons, Ned and Tom Kimmel, were turned down by both Bushes and President Clinton. All the rejections seem to convey basically the same sentiment. Dick Cheney wrote, advising them to “… seek help from the voices of that time.” Even more telling was when President George H. W. Bush said by way of rejection that restoring his rank “…would do no honor to the admiral and might very well tear the tapestry that time and history have so thoughtfully woven.” An interpretation of this might read: “It would ruin the story that was created, give away information, and threaten the peace.”

At its heart, this book is a story of how difficult circumstances and being concerned with appearances can risk not only friendships but lives. If one of the reasons it was not admitted that Kimmel did not receive adequate notification of what was going on was to make the Administration look good, or, worse, if it was to sacrifice Pearl Harbor, the effects of that decision and the secrets kept were terrible and will linger forever.

Swan’s and Summers’ enormous body of research reflects their respect for the Kimmel family.  But it also shows respect for those in the military who made bad calls before and after the attack.

Every reader of A Matter of Honor will have his or her own opinion about the part the attack on Pearl Harbor played in the history of our country, about what actually happened and how the whole event was handled.  What all readers will agree on, though, is that this book is a well-told account of historical events put together in a riveting, page turning fashion and a book that is an important historical document.

Sheila Gazlay has a degree in journalism and has been a writer for more than 20 years.  She has contributed book reviews to The Literary Hatchet as well as other online journals.  She enjoys writing book reviews and fiction.