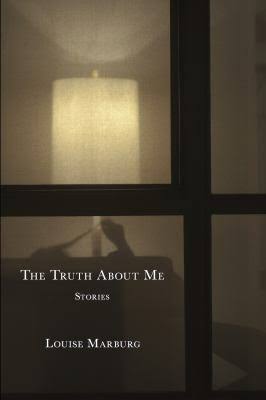 Louise Marburg’s highly-acclaimed fiction debut, The Truth About Me: Stories, sizzles with scissor-sharp prose and deeply affecting emotional and personal dramas. Themes of lies, self-perception, mental illness, dislocation, and family relationships, especially ones complicated by wealth, weave throughout the collection. She manages to pull us into the depths of her characters’ deepest secrets and fears without flinching and without a crumb of sentimentality.

One “Marburg specialty” in this collection is how she squares her characters’ self-perceptions against the perceptions of the world around them. This juxtaposition reminds us that the world cares less about us than we think, but it also comes with a liberating sense that maybe, even at our very weirdest, we’re just not that weird.

For example, in the first and eponymous story, “The Truth About Me,” Harry lies to his new neighbors about who he is – it’s clear he lies to most people about himself – and then he spends the rest of the story worrying his truth will come out. His truth: “I hadn’t been on a date in over five years, and hadn’t had sex since my senior prom…I took six pills a day, and heard a malignant voice if I didn’t.”  Harry finally comes clean to his new friend, Mun, who instead of being shocked, basically shrugs it off and lists the string of oddities he had already noticed, and accepted, about Harry. The pressure that had been building inside Harry while he protected his sad little secrets deflates, and the story ends with a mix of relief and embarrassment: he’s not as weird as he thought, or if he is, it doesn’t matter as much as he feared.

Marburg’s crisp, deft language usage is another signature of the collection. A few of the opening lines showcase her spare command. “Poor Bob” opens, “‘Do you still love me?’ I asked. I don’t know why. It just popped out as I sat there watching him die, a childish question from the mouth of a grown woman.” These few stark lines deliver the heart of this story: deathbed visit between somewhat estranged father and adult daughter, loss complicated with the regret of never having been close, a harrowing aching.

The first lines of “Anything Can Happen” carry similar force: “On the morning Ivan Humphrey lost his mind, I was standing at my kitchen window, which has a partial view of Ivan’s backyard. I wasn’t looking at anything in particular, or thinking about anything memorable.” Here we grasp the narrator’s dispassionate state of mind and get an inkling of the horrors of what she’s about to witness. She maintains her cool collectedness throughout the unraveling of the story’s events and proves to be a hauntingly reliable narrator, a quality these first lines establish immediately.

“What Brings You Down?” provides maybe my favorite opening line: “Jamison’s mother broke her leg at the movie theater by tripping and falling on a flight of stairs that was illuminated by strips of light so people wouldn’t trip and fall.” The irony provides some humor to kick off this tale of family dysfunction, complete with a pilfering self-appointed home care helper, tensions between siblings, the demands of caring for aging parents, and more.

Sibling tension is another recurring theme. Both “What Brings You Down?” and “Vacationland” center on problematic sibling relationships. The care of aging parents, at the center of “What Brings You Down?” is complicated enough. Throw in some sibling issues and coping becomes harder yet. Vacationing with another couple introduces the potential for all manner of problems, but what about when the other couple is your sister and brother-in-law, as in “Vacationland,” and the brother-in-law starts pursuing your girlfriend? Sibling conflicts raise the stakes in both these stories.

In other stories, characters tangle with family dysfunctions complicated by stepfamilies and claims to family fortunes. They struggle against the veneer of the polished high life, seeking something deeper. They fight addiction. They battle an array of mental illnesses. They visit  therapists and take volumes of meds.  One could argue that the therapist-to-character ratio in this book is a bit high, but Marburg avoids therapy tropes and mental illness stereotypes, and, all the while, the prose is smooth, centered, spare.

Story after story, Marburg draws us into the whorls of her characters’ inner workings with sharp phrasing and unpretentious emotion.  The result is a compelling and masterful collection.