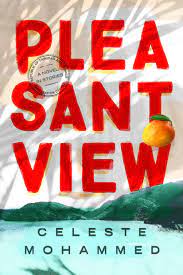 A fresh voice in Caribbean literature, Celeste Mohammed takes us on a guided tour of the flipside of island life in her debut novel-in-stories from Ig Publishing, Pleasantview.

Mohammed’s stories and essays have appeared in The New England Review, Litmag, Epiphany, The Common, and other journals, and she received the 2018 PEN/Robert J. Dau Short Story Prize for Emerging Writers, the 2019 Virginia Woolf Award for Short Fiction, and the 2017 John Gardner Memorial Prize for Fiction. She is a writer to watch.

Native to Trinidad and Tobago, where she currently resides, Mohammed renders places and characters with authenticity, complexity, and tenderness. Employing a range of patois, she delivers each character’s unique voice and reflects the ethnic and socioeconomic diversity of a crossroads nation peopled by changing waves of colonization, immigration and emigration, and shadowed by historical connections to the slave trade that continue to pressure the economy and social order.

Vibrant language throughout Pleasantview captures place and character. As Sunil swims to escape an island prison in “The Dragon’s Mouth (Bocas del Dragón),” his vantage turns the full moon into a clever adversary, revealing his vulnerability: “It have full moon…grinning like it know what we planning and so it come out for spite, to make sure everybody see we.” Similarly, in “The Ides of March,” Corporal Sharpe’s experience of a breeze mirrors his aggressive policing style as “[a] fat wind came off the mountain and barged its way down the street.”

Everything Miss Ivy does is vibrant. Appearing in a handful of stories she is “the Mighty Miss Ivy, Pleasantview’s seer woman, Mother Superior of the whole village,” as she puts it in “Santimanitay.” Her credentials as neighborhood babysitter, former long-time housekeeper of the powerful H family, and fortune-teller allow her access to the rich and the regular citizens of Pleasantview alike, while her “gift” of reading the future gives her sway over them all. Always decked out in the hand-me-down fur coat Mrs. H gave her on her retirement from service in the H household, she cuts a memorable figure in whatever scene she graces.

Women’s struggles center mostly around vying for power, often within relationships with more powerful men. Consuela in “The Dragon’s Mouth (Bocas del Dragón)” weighs obligations to the fiancé whose father sold her into prostitution against obligations to a local businessman who requested regular services from her, “…counting how much more she’ll be able to send to mother, if Mr. Jagroop sets her up as his mistress. It would make sense of everything: her journey [emigrating from Venezuela] and the death of who she was before Icacos.” Caught fleeing with Sunil, though, “Jagroop kicks her, over and over, while she becomes an eel on the gritty pavement,” and the little power Consuela thinks she has disintegrates.

In “White Envelope,” Gail, the main character, becomes pregnant believing that her pregnancy will give her leverage with her sugar daddy, imagining her unborn baby as a ticket out of her own neighborhood and into Mr. H’s. We see her part of town in negative relief: “No more stepping over shit-smelling drains, no more bullets popping all hours of the night, no more wondering when the garbage truck will pass, no more feeling shame to write my address on a form.” Mr. H’s neighborhood is all positives, though, where, “[m]e and my child go be up the hill, on a quiet street, playing on a green, green lawn and just waiting for Daddy to come home from his new store.” Before Mr. H dashes her hopes, Gail faces her own doubts. “Growing up in Pleasantview hard enough if you poor and black; but it worse if you light-skin and have good hair. Then everybody know some high-color man did take your mother for a ass, and that you have a fine, respectable Daddy who don’t want you. You come like a double-joke,” revealing yet more about limitations on her power, and her dreams.

Pleasantview men muck through their share of desperation, too. After Luther Junior loses his mechanical engineering job, and his self-respect, in “Six Months,” he vests his hopes in a green card and a cousin in America, only to find that his best prospect there is stocking groceries at a market for hardly enough money to support his common-law wife Judith and their two boys back home. When another clerk at the store takes a liking to Luther, his cousin presses him to acquiesce. Marrying this white woman would grant him permanent status in America, posing the irresistible question in Luther’s mind, “Why keep sending your family sandwich money when you could bring them to a fuckin’ banquet?” His simplistic scheme crashes in on itself, and, when his sons reappear in the epilogue, “Kings of the Earth,” we witness how his failures reverberate across their lives, priming his eldest to sympathize with an extremist Muslim youth group.

For casual visitors, Trinidad is an island paradise of awe-inspiring landscapes, dazzling music, and delicious food. Pleasantview readers see underneath this surface into commonly unseen complications and contradictions of everyday Trinidad resulting in a more well-rounded sense of place. It is a literary treat.