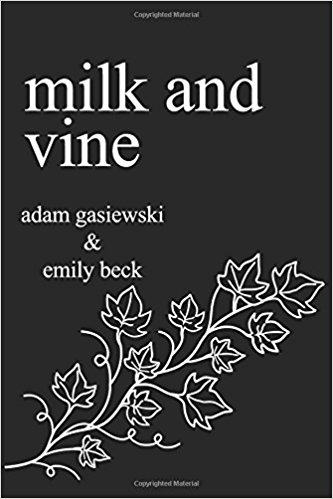 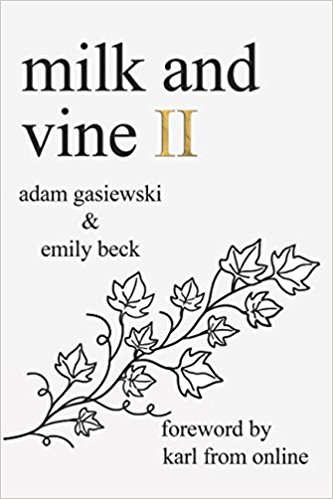 Adam Gasiewski and Emily Beck have joined together to create this parody of the internet sensation Milk and Honey. After its publication, Milk and Vine quickly became an Amazon best seller, and with reason. These books aptly reflect a shift in the structure of popular poetry towards online paradigms. In short, these poems look and read more like social media.  The content of these poems may be simple (quotes pulled from online vines), but the structure and careful delegation of phrases make these collections marvels of modern poetics.

Milk and Vine is composed of witty, short-winded poems which has been appealing to readers who are most familiar with social media formats which may only allow a few characters to express an idea. Because of the direct-from-the-net content, these poems also have the same voyeuristic quality as reading online posts. Many of the poems also have a raw, confessional element that arguably is the allure of many social media sites. For instance, one of the wordiest poems of the first collection, though only two brief stanzas long offers the reader some exposition, a bit of dialogue-like language, and certainly some conflict. When closely critiqued these poems seem less like mundane content pulled from the web, and more like carefully orchestrated prototypes of modern poetry, specifically in terms of structure.

me and my boys are going to see

give me my hat back Jordan

do you want to go see

If imagery is to be considered, further credit can be given to the writers’ technique. This poem invites the reader into a spot of time, an experience totally set apart from any other occurrence. The depiction of a spot in time is an age-old technique used in poetry to enrapture readers within even the briefest of poems.

At times Milk and Vine is hilarious and even nonsensical, and at other times the tone of the poems become serious or they reflect a social conundrum. One critique of the books however, is to question how the writers of the original vines were given credit for their contributions. On the other hand, if you are looking for a poetry read which demonstrates new-age construction and form, give these books a try!  The online popularity of Milk and Vine assures that these books are likely to spark great conversation amongst poetry scholars and social-media fanatics alike.

Mel Sherrer is a performance poet and teacher living in San Marcos, Texas. She is the Managing Poetry Editor for South 85 Journal.