I have a confession to make. I don’t write every day. I don’t even write every other day. Despite the advice of every writing instructor and every craft book I’ve encountered, I have never managed to write more than once a week, and never more than two or three hours at that. And I’ve spent a long time asking myself if that means I’m not a Real Writer.

In my day job, I’m an academic, so I have plenty of experience with imposter syndrome, and it’s plagued my confidence as a writer for years. I know that most of us have full-time jobs in other fields, so I’m not alone in finding it hard to carve out time to write. But so many other people seem better at accomplishing it. I can’t get up at four a.m. to write before dawn; I object to four a.m. on principle. I can’t squeeze in fifteen minutes of writing during my lunch break; I just get settled in when it’s time to go back to work. What I’m left with is a jealously guarded window of time on Sunday afternoons when I hunch over my laptop or notebook and descend into a caffeinated frenzy of creation.

Astonishingly, writing once a week actually seems to work for me. In the past year, I’ve drafted one full novel and published several short pieces. And in that year, I’ve realized that the physical act of writing is only one part of the writing process. I’ve discovered that, while I’m only at my desk typing away for two ours on a Sunday, I’m actually preparing for those two hours every other day of the week. While I work out, I’m mapping my plot, imagining my beat sheet superimposed over the screen of the elliptical. I recently had a terrific revelation about a troublesome character while I was flossing my teeth. In the shower, I’m trying out lines of dialogue: yes, out loud. This habit must be particularly entertaining to my downstairs neighbor when my characters start arguing.

Some writers can compose in snatches, a sentence on the subway, a paragraph at lunch. The fact that I can’t do that has often made me feel unprofessional by comparison, as though, if I was a Real Writer, I would be able to wrestle my brain into submission and force it to produce art on a schedule. But the truth is I will never be that kind of writer. I need a large, uninterrupted swath of time to sit down and write: time to stare at the wall, gaze vacantly out the window, type and erase, type and erase. What I know now, though, is that I might not be able to write in short intervals, but I can think in them. My brain is at work even if my hands aren’t. So when I do sit down on Sunday with my coffee and my two hours of writing ahead of me, I have a head full of material waiting to be drawn out on the page. And whether that makes me as a Real Writer or not is beside the point: I’m writing, and that’s all I care about.

Christine Schott teaches literature and creative writing at Erskine College.  She is Pushcart-nominated author whose work has appeared in the Gettysburg Review, Dappled Things, Casino Literary Magazine, and Wanderlust.  She holds a PhD in medieval literature from the University of Virginia and an MFA in creative writing from Converse College and has been working for South85 for three years. 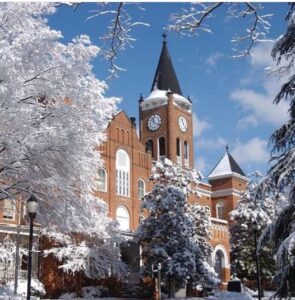 Do you wish you could put your love for writing first?

Would you like a course of study that is personalized to your specific interests?

Have you always wanted to work closely with published authors and mentors?

Then apply today to Converse University’s Low-Residency MFA program and choose to empower your writing.

Not sure whether you are ready to start an MFA program? 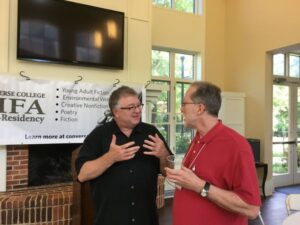 Try the Converse MFA Immersion Residency, which offers writers who hold a bachelor’s degree a chance to immerse themselves in the writing culture by attending and fully participating in one full residency session.

The Converse Low Residency MFA program also offers a lecture pass that includes morning and afternoon craft lectures and round table discussions as part of the instructional curriculum during each residency session.

It’s a great opportunity  to get a glimpse into the Converse MFA program.

Students and alums of the Converse MFA program have access to publishing opportunities through the Clemson-Converse Literature Series and can submit their manuscripts to the  Converse MFA series for the biennial award.

What you need to apply:

In addition to meeting the minimum requirements set by the Converse University Graduate School, the MFA applicant must receive approval for degree program status from the MFA program faculty and director.

2. MFA manuscript cover sheet attached to each copy of portfolio.

4. Official transcripts from the accredited college or university from which applicant’s highest degree was awarded. A minimum GPA of 2.75 on a 4.0 scale is required for full admission.

So what are you waiting for. Apply today!

More information and answers to commonly asked questions are available on the Converse University MFA Website (click on this link).